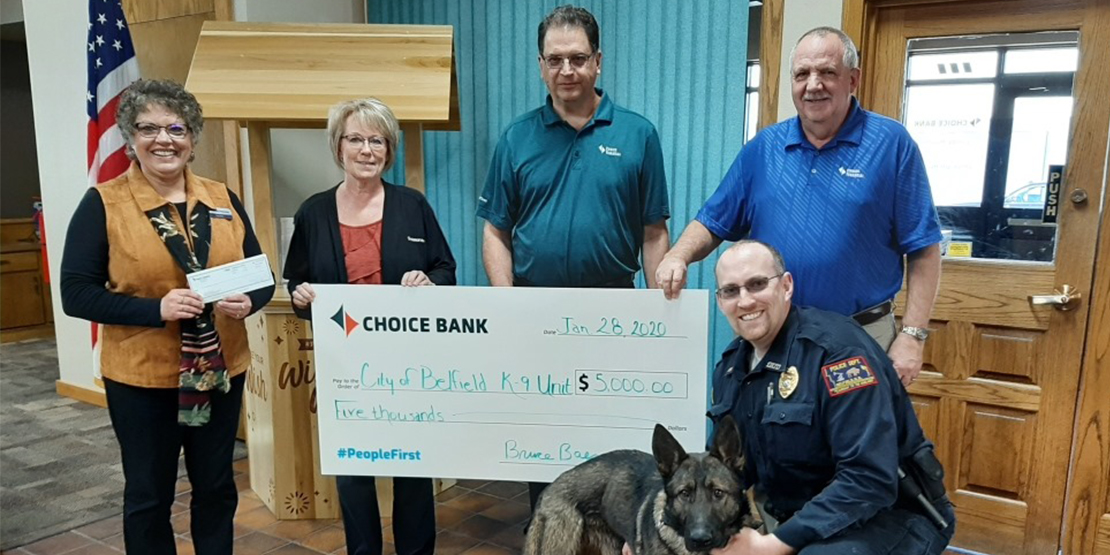 Chief Byrne and new K-9 officer Thor make the rounds and pop into our Belfield location to say hi!

In 2013, the Belfield Police Department welcomed an important member to the force and to the community of Belfield: K-9 officer Zeus. Backup isn’t always readily available, especially in a small town with a small police department, so Zeus was brought on as Chief Stephen Byrne’s partner. Not long after, Chief Byrne’s and Zeus became the best of friends.

Zeus may not have known it, but he served an incredibly important role in the community of Belfield by protecting both law enforcement and the community.

Zeus may not have known it, but he served an incredibly important role in the community of Belfield by protecting both law enforcement and the community at large. He was trained as a dual-purpose K-9, which meant that he was trained in locating narcotics and in apprehension.

In their off-time, Chief Byrne and Zeus would put on presentations and regularly visit classrooms to build relationships and educate the public. Together, they taught everyone about safety and helped the community feel more comfortable with law enforcement.

Then, in early August 2019, after a routine appointment, a lump was discovered in Zeus’ neck. Zeus was diagnosed with metastatic non-pigmented melanoma that was spreading. His condition steadily deteriorated as he became lethargic and experienced labored breathing and loss of strength.

By the end of August, Chief Byrnes and Zeus’ medical team were faced with the heartbreaking decision to euthanize Zeus.

By the end of August, Chief Byrnes and Zeus’ medical team were faced with the heartbreaking decision to euthanize Zeus. Flags in the community were lowered to half-mast in honor of the much-beloved, fallen officer who had stolen everyone’s hearts.

Chief Byrnes had witnessed first-hand how much of an impact Zeus had had on his department and the community. And so, several months after Zeus’ passing, Chief Byrnes approached the Belfield City Council and was approved to raise funds for a dual-purpose K-9 just like Zeus.

Chief Byrnes immediately began meeting with businesses and community members to talk about the importance of the K-9 program, seeking local support and donations. The community response was incredible!

Between the numerous donations sent in by the community and a $5,000 donation from our Wishing Well Program, the Belfield PD was successfully able to reach their fundraising goal in a short amount of time.

Thor is eager to prove that he’s ready to be the next dog of thunder in town!

The search for the perfect K-9 candidate was lengthy, but by the beginning of the new year, Belfield PD proudly introduced their new officer: Thor.

Right now Thor is full of puppy energy and is loving his new family at the Belfield PD. He enjoys meeting everyone in the community while he learns the ropes of his new job. After all, he’s got some big paws to fill, but Thor is eager to prove that he’s ready to be the next dog of thunder in town!

Before the Snow Falls

Koozies and cupcakes and teamwork, oh my!