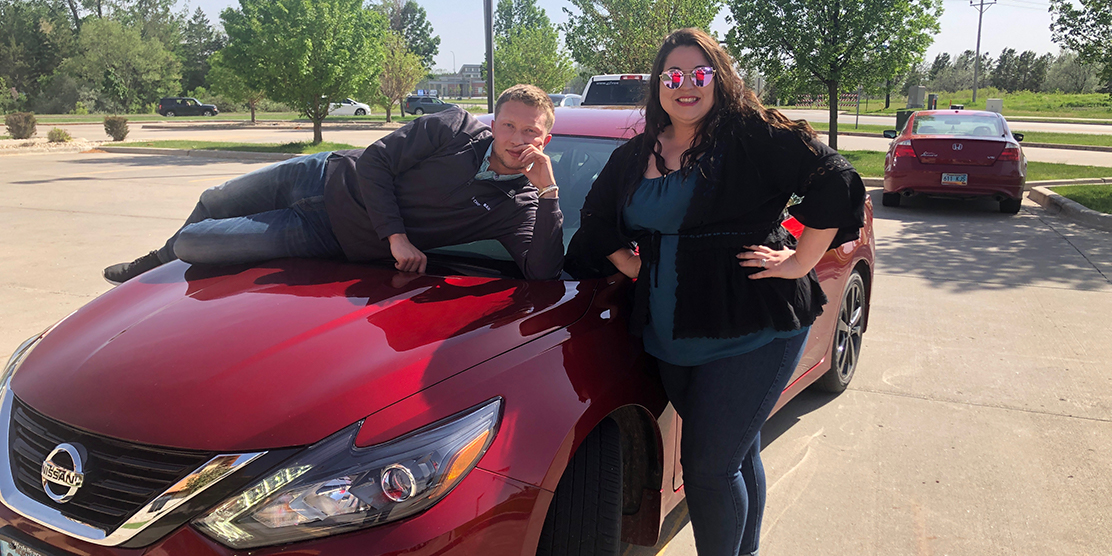 Without a car, Jenny had no way to get to where she needed to be. Elisha and Ryan didn't even have to think twice about lending her a helping hand.

Jenny sat with her shoulders slumped and her brow furrowed, as snow began to fall outside. It was 11:00 AM, and she had walked from work to come to the closest bank she could find — a Choice Bank in Grand Forks — to cash a check from her employer that she desperately needed. There was just one catch—the check was issued from a different bank.

“We’re sorry,” said Elisha Ferguson, a Universal Banker. “This check is from another bank. You would have to go there to cash it.”

Elisha didn’t want to leave Jenny hanging so she offered to open an account for her at Choice Bank so that she could deposit the check there. But Jenny had recently lost her apartment and her car. Even her phone wasn’t working at the time. With no address or phone number, they didn’t have the information they needed to set up the account. Her only option was to go to the bank that had issued the check.

For Jenny, it seemed she was encountering obstacle after obstacle. She knew it wasn’t Choice Bank’s fault, but she felt angry nonetheless.

To her shock and surprise, Elisha responded without hesitation. “I will!”

But then, Elisha realized she had an obstacle of her own. That morning driving into the Choice parking lot, her Buick had sunk deep into the mounting snow and would not move. The snow plows hadn’t come yet, so her car was currently out of commission.

“Oh no… my car is stuck in a snow bank,” she realized aloud. Ryan Chrest, a Client Services Specialist, was nearby and overheard.

“We can take mine!” he offered.

Jenny sat back in her chair. “Seriously?” she said.

This had not been what she expected when she angrily asked about transportation. But apparently they were serious, and soon the three of them were hopping into Ryan’s Nissan Altima to make the 10-minute drive to the other bank.

“Thank you,” she managed, getting into the back seat.

“Of course!” Elisha and Ryan said.

It was the week of the big April blizzard, and snow was thick and slushy on the roads. Nevertheless, Ryan’s Nissan was sturdy and offering Jenny help put the two co-workers in good spirits. They put on some music and chatted with Jenny about her story. They learned she was originally from Chicago but had followed a friend up to Grand Forks, where she had some family. However, something had gone wrong with her apartment and recently she had been staying at the Northlands Rescue Mission, a local homeless shelter. This check was going to help her get back on her feet, she said.

As they talked, Jenny began to sit up straighter. By the time they arrived at the other bank, she was beginning to smile. Just a little.

As they talked, Jenny began to sit up straighter. By the time they arrived at the other bank, she was beginning to smile. Just a little.

At the bank, Ryan and Elisha sipped on coffee while Jenny deposited her check. Everything went smoothly, and within a few minutes, they were heading back to the car.

“Where can we bring you now?” Ryan asked Jenny.

“Well,” Jenny paused. “Would you be able to give me a ride to the Townhouse? I’m meeting some family there.”

The Townhouse is a hotel in Grand Forks — and it was on the other end of town. But they knew Jenny didn’t have many options.

Fifteen minutes later, they were pulling up to the hotel and Jenny was waving out the window to her family members. She smiled at Ryan and Elisha as she stepped out of the car.

“Thank you so much,” she said. “I never knew bankers did things like this.”

“Thank you so much,” she said. “I never knew bankers did things like this.”

She paused before adding, “Once I get my stuff together, I’m definitely opening an account with you guys.”

As she walked to meet her family, Ryan and Elisha smiled, proud that they could prove once again how Choice Bank does things differently by being PeopleFirst.

“I don’t think she thought we would do anything for her,” Ryan said, reflecting on the story. “It’s showing her that we’re actually people, who actually care. We don’t want anyone to feel like a transaction.”

The Choice Bank core value know when to ask for help, know when to offer it comes to mind; Jenny didn’t even mean to ask for help, but in doing so, Elisha and Ryan were able to offer it and make her day a little brighter. And, in their 45 minutes together, they exemplified the value Smile, be helpful and be passionate. Jenny is not a Choice customer, and yet by showing her that they care about her as a person, Elisha and Ryan are showing what it means to truly be PeopleFirst.

The Quest for Króna