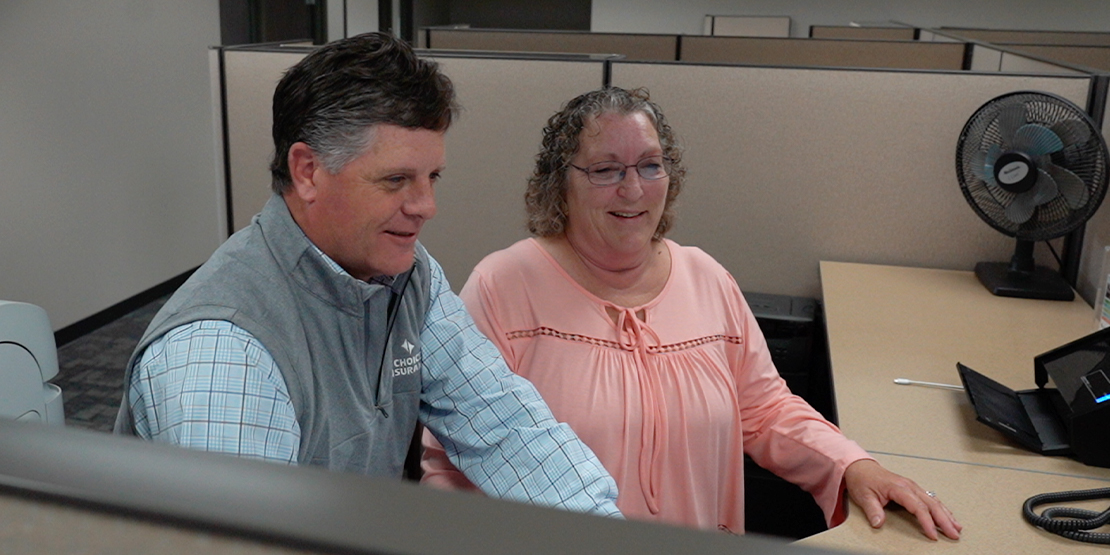 Whether they've known a customer for one minute or 20 years, Joe and Sue make it a point to ensure their customers' experience with them is as memorable and pleasant as possible—even if that means letting them go.

In August 2018, Joe Walker received news that no insurance advisor wants to hear: a long-time Choice Insurance customer had been approached by another, larger agency in Iowa, who had sold them on a plan to take them in a different direction.

“We were disappointed. The relationships that we build with our customers, they are tough to lose,” Joe said. “They become friends, as well as customers.”

“ We’re not going to burn any bridges, we’re going to give them what they want,’” Joe said. “That’s just how we operate.”

The customer, a Minnesota-based trucking and shipping company, had been with Choice for 12 years. They were originally brought in by Joe’s brother-in-law, Reynolds Fisher, in 2006. When Reynolds passed away from cancer in 2018, Joe took over the account.

Account Executive Sue Fischer-LeBeau had worked with the customer from day one, attending to all of their administrative and customer service needs. As disappointed as she and Joe were to lose their business, they knew that they had a responsibility to make the customer’s experience with Choice as memorable and pleasant as possible—even if that meant letting them go.

“We said, ‘We are going to do whatever it takes to make the transition to their new agency as easy as possible. We’re not going to burn any bridges, we’re going to give them what they want,’” Joe said. “That’s just how we operate.”

Chuck Klabo, Director of Insurance at Choice Bank, was impressed by Sue and Joe’s commitment to their customers during a difficult time.

“We work very closely with our customers. When we end up losing an account, it’s hard,” Chuck said. “But whenever we seek out ways to help people, I think that our customers see that. They appreciate it, and they know that it is genuine.”

“Whenever we seek out ways to help people, I think that our customers see that.”

The customer did see it, and the memory of how well they had been treated during their departure from Choice stuck with them. In May 2019, only nine months later, Joe received another phone call from the president and owner of the trucking company.

This time, the news he received was much happier.

After less than a year, the customer had realized that they had made a mistake. They were not happy with their decision to transfer to a larger agency; they missed the local presence and personalized service they received from Joe, Sue, and the rest of the team at Choice.

The president asked Joe, almost timidly, if Choice would be willing to take them back as a customer.

Joe and Sue sprang into action immediately. The call came just a few months before the next renewal—there was no time to waste. Joe met with the customer that week to review their assets and write up a quote, and within days Sue had all of their new information entered into the system.

“She was tireless. She knew the importance of timing,” Joe said. “I couldn’t have gotten the job done without her standing beside me.”

The account renewed on August 1, 2019. The very next day, Joe hand-delivered all of the customer’s auto-identification cards so they would not experience any lapse in coverage.

“They were thrilled with that,” Joe said. “That’s just the kind of stuff that we do. It’s all about putting the client first.”

“We never give up on a customer or a friend.”

Every insurance agent celebrates when they bring in a new customer; what sets them apart is how they react to losing one. To Chuck, Joe and Sue’s response to their long-time customer leaving—and coming back again—is an example of Choice Bank’s core values in action.

The Red Roses of Belfield

Every Picture Tells a Story

Danne Doering and the Case of the Direct Deposits