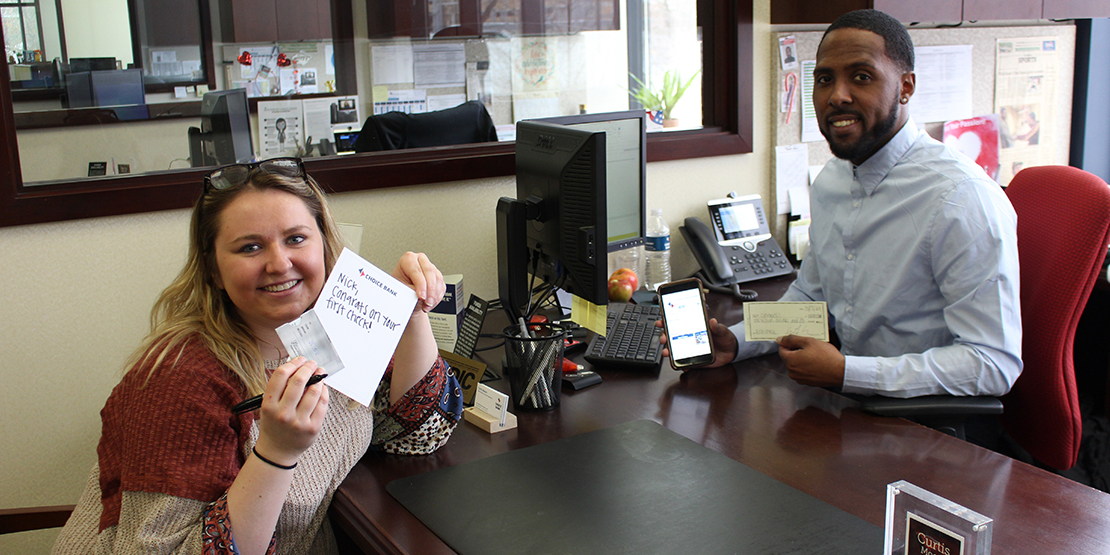 Kirsten and Curtis teaming up to help a client celebrate their first deposit as a business.

For new entrepreneurs, there are plenty of emotions involved with quitting your job, branching out, and starting your own company. Perhaps one of the strongest is fear of failure, and sense of risk. What’s on the line? How much could be lost? Is this even a good idea?

On the flip side, the first signs of success feel like sighs of relief, worthy of champagne and celebration. For Camber Road, it came in the form of a check.

Camber Road is a lease financing group recently started by four friends who left comfortable jobs to start a new venture. While the friends hail from across the country, two live in Minneapolis and have recently begun banking with Choice Bank in Bloomington.

Adam Davis, Credit Risk Officer, works with them often. He knows their story, and how much was at stake with starting a new company.

“They are all very successful, and decided they wanted to work for themselves. They took a lot of risks leaving their former jobs,” he said. “In that situation, there’s lots of uncertainty about the future.”

Nevertheless, the friends worked hard and began to see success with Camber Road. Then, one day, one of the partners, Ryan Hartung, came into the bank with exciting news. The company had received its first check!

“It was their first deposit from their business operations,” Adam said. “It symbolized a new beginning.”

The company had received its first check! “It was their first deposit from their business operations,” Adam said. “It symbolized a new beginning.”

Being the milestone that it was, Ryan had a special request. Would it be possible to keep the check after it was deposited?

It was the first time Adam had heard that request.

“If you have a moment, we can get the paperwork done,” Curtis explained. Ryan was happy to oblige.

Knowing the customer was waiting, Curtis worked fast. He called the cash management team and asked if they could make a special exception for this account and get the check processed ASAP, instead of the normal few hours wait. They agreed, the Camber Road account was set up, and the check was processed within a few minutes.

Meanwhile, Kirsten Larson, a Client Services Specialist, was quietly making her own surprise for the customer. She overheard that this was their first business deposit, and could see how excited Ryan was.

While Adam, Ryan, and Curtis set up his mobile deposit account, she went to the back and grabbed one of their #PeopleFirst gift cards, to a nearby restaurant where the team could celebrate. She handwrote a note that said, “Congrats on your first check! Celebration dinner is on us at Choice Bank.”

“It was obviously a big deal for them,” Kirsten said. “I thought it would be a fun way to celebrate.”

Unbeknownst to Curtis or Adam, Kirsten handed Ryan the envelope with his other paperwork while he was leaving. He didn’t notice what it was.

“Thanks so much for making this possible!” he said, holding the check. They planned to frame it in their office. Thanks to Curtis’s quick thinking, they would be able to do that.

Ryan didn’t even open the envelope until later. Adam got a surprised follow-up e-mail.

Ryan didn’t even open the envelope until later. Adam got a surprised follow-up email.

“They thanked us for the ‘fantastic customer service experience’ and said they were really impressed,” Adam said, smiling. “I was too! None of us knew Kirsten had done that. It really stood out to the customer.”

It was especially impactful, Adam said, considering this was a new business customer. Both Curtis’s helpful assistance allowing the company to keep their first check, and Kirsten’s thoughtfulness in adding a celebratory note and gift card made a lasting impression of who Choice is: #PeopleFirst, coming alongside the customer every step of the way.

Two core values that came to mind with this story were: Create personal and professional growth opportunities, and seek and share knowledge.

“Doing things like this, something unexpected for the customer — it brightens their day,” Adam said. “It shows we’re celebrating with them.” 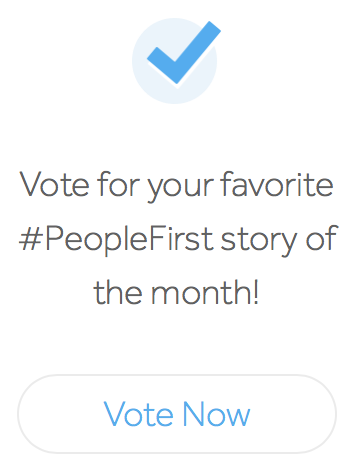 Putting the ‘Erv’ in ‘Service’