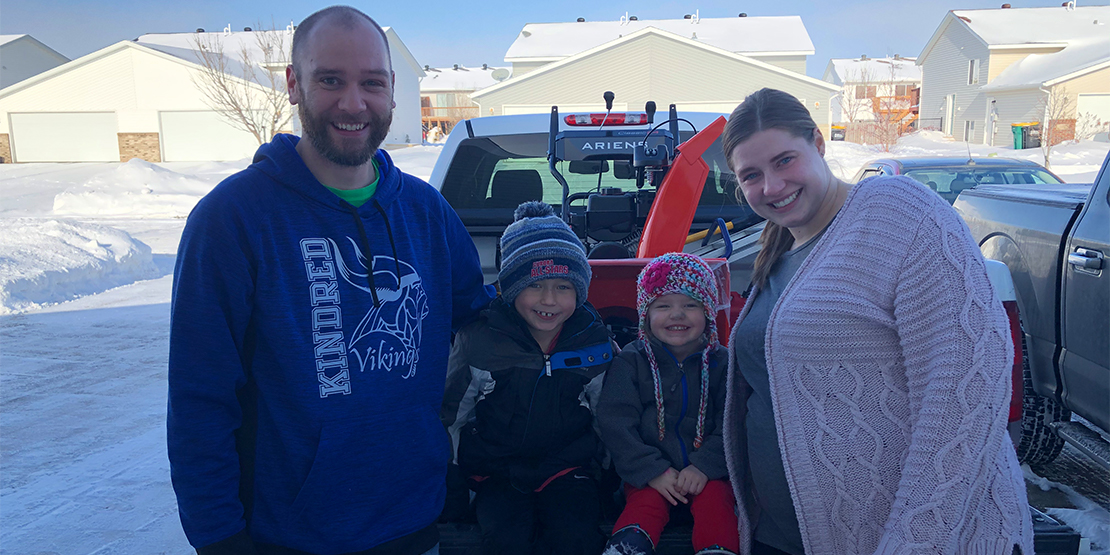 The Mesecks were busy settling into a new home and planning around Nick's scheduled surgery when Tori's team members at work banded together to help make their load a little lighter.

December can be one of the busiest most wonderful times of the year ushering in a childlike excitement between gatherings with friends and family, delicious food, and gift-giving. But for the Meseck family, December came with a flurry of challenges alongside the usual holiday fanfare.

They were scheduled to head to Mayo Clinic for Nick to receive surgery to remove a tumor from behind his eye. The timing wasn’t ideal.

With baby #3 on the way, Tori and Nick Meseck had just moved out of an apartment and were in the process of settling into a new home with their two young children. On top of that, they were scheduled to head to Mayo Clinic the week of December 9 for Nick to receive surgery to remove a tumor from behind his eye. The timing wasn’t ideal, and he would have to take time away from work to recover, but they had been waiting since August to get him in.

At work, Tori’s peers were curious how she and Nick were getting along in their new house especially now that they had to deal with clearing snow off a driveway. Since Tori was expecting, Nick was the one doing most of the shoveling until his surgery.

Hearing this sparked an idea for Client Account Executives Michelle Christensen and Donna Bourcy: could the Wishing Well help make life a little easier for Tori and Nick during such a hectic time? They brought it back to the rest of their team members and after some quick brainstorming, decided to submit a wish for a snowblower on behalf of Tori and Nick.

A couple of weeks passed, it was Friday, December 27 and no major snowfall had hit Fargo, yet. Nick’s surgery was successful, and he was doing well in his recovery at home. Tori had returned to the office after a short break away for the holidays. Little did she know that while she was settling into the normal workday, Donna and her peers were quietly working in the background to pull off the perfectly timed surprise.

“They said they had to show me something and asked me to go outside and there it was in Tony’s truck!”

Donna had gotten a call early in the morning from Wishing Well Committee member Gaige Dunn, who was excited to break the news that the team’s wish for Tori and Nick was granted. Knowing that a huge snowstorm would hit over the weekend, Donna and crew got down to business.

One team member quickly started listing off snowblower recommendations and suggested they order online and pick it up in stores. Another offered up his truck to go pick up the snowblower. Others started going through office holiday decorations to search for a bow to match. Within just a couple hours they had the new snowblower primed and prepped for Tori outside the office.

“They said they had to show me something and asked me to go outside and there it was in Tony’s truck!” said Tori.

“It was such an awesome feeling to be able to help out Tori and Nick and take a little bit of stress off their plate,” said Donna. “Seeing everyone come together…it truly was a team effort.”

“I had absolutely no idea what they were up to. All I can say is thank you!” added Tori.

A Walk in Medina