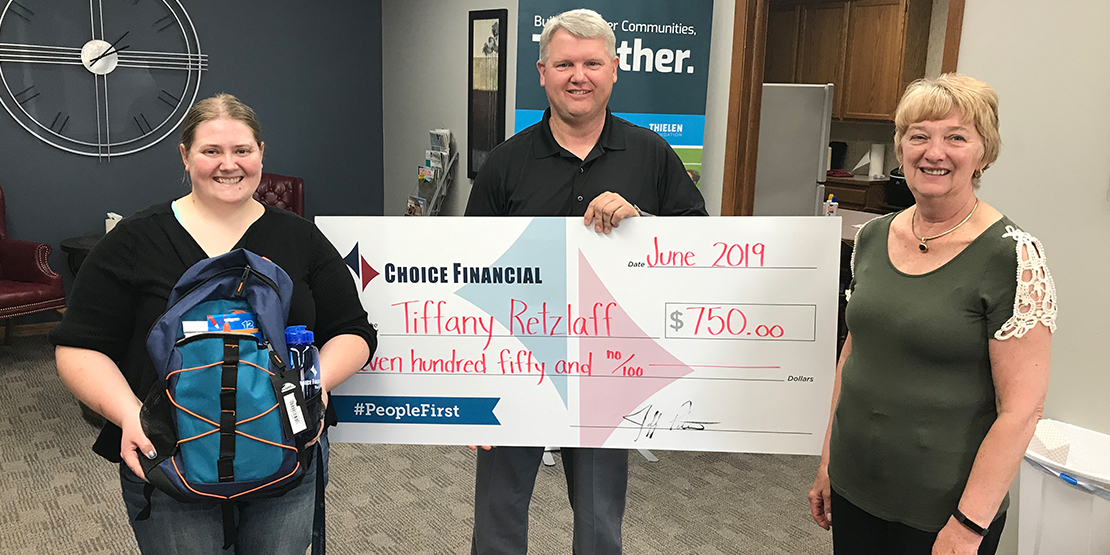 Every year, Tiffany Retzlaff (left) fills backpacks full of school supplies for her backpack ministry in Chicago. Each year her goal of how many she fills gets bigger. For 2019 she wanted to fill 75 backpacks, but needed a little help!

For the past four years, Tiffany Retzlaff has diligently filled backpack after backpack full of school supplies for her backpack ministry on the south side of Chicago. The ministry itself aims to serve students of all grade levels who attend Chicago Public Schools. In June, once enough backpacks have been collected, a group of North Dakotan teenagers pack them up and give them out during their mission trips to the big “Windy City”.

So, who is Tiffany? She’s a born and raised North Dakotan who’s called Ellendale home for most of her life. She’s also an independent consultant for Scentsy, a company that specializes in flameless candles and other scent products for laundry and bath. With a big heart and a passion for giving, she dedicates one hundred percent of her Scentsy sales towards filling backpacks each year.

After reaching her goal of filling 50 backpacks for 2018, Tiffany decided to raise the bar in 2019.

After reaching her goal of filling 50 backpacks for 2018, Tiffany decided to raise the bar in 2019. This year her goal was going to be a lofty 75 backpacks!

Knowing she was in for a challenge, Tiffany was prepared to double down extra hard to achieve her goal when she heard about the Choice Bank Wishing Well Program. She quickly went home to type up her wish, detailing her story and her goal and asked for $500 that would fill around 15 backpacks. Also enclosed with her wish were some pictures from past mission trips. One of which was a young girl with her mother whose backpack had been recently stolen but was able to quickly get it replaced with the help of the backpack ministry.

Little did she know that several months later, the Choice Bank team in Ellendale would be brainstorming how to tell her that her wish had been granted. They were actually quite familiar with Tiffany and regularly bought Scentsy products from her whenever they were looking to freshen the office up.

Elizabeth VanAarde, Relationship Banker, immediately had an idea and picked up the phone.

“Hi, Tiffany! We’re running a little low on our Scentsy stock, do you think you could swing by when you get a chance?” asked Elizabeth.

Realizing she was there for more than just a regular call, Tiffany’s eyes widened with shock and started tearing up as she saw the check.

Without hesitation, Tiffany packed up some of her newest samples and headed over. She was greeted by the team and ready to showcase some of her samples when Elizabeth stepped in.

“Before you do that, we have something here for you in the back,” she said with a smile.

“Tiffany, we put together a backpack full of school supplies as a contribution to your ministry, but we couldn’t just do $500 because we think that your mission deserves more,” said Diane. “We like what you do, and we appreciate all your community work.”

On cue, Jeff Petersen, Location President walked in with a giant check written out for $750. Realizing she was there for more than just a regular call, Tiffany’s eyes widened with shock and started tearing up as she saw the check.

“We hope you’ll be able to fill at least 15 backpacks and then some,” said Diane.

“And then some!” exclaimed Tiffany.

A couple of months later, Tiffany stopped in again. Instead of bringing in Scentsy, she brought in dozens of pictures and thank you cards that had been sent by the kids who had received the backpacks and the ministry workers showing that a little giving can go a long way.

Home Away From Home