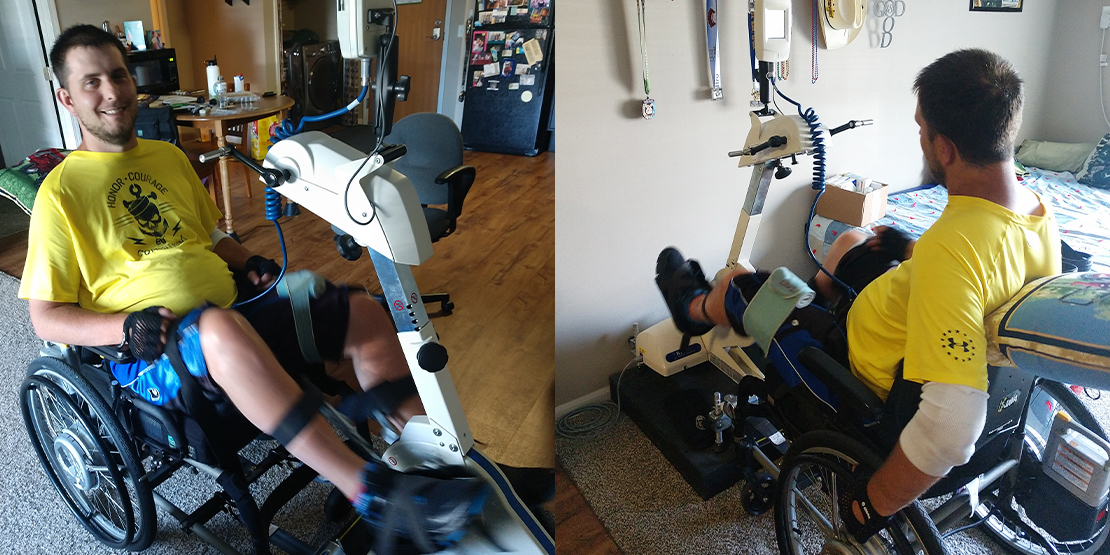 After Garrett received his new electrodes he was able to put them to good use AND get a great work out.

There’s a lot that needs to happen before heading out on a big, long trip. Between making sure you get caught up at work, maybe finding a pet-sitter, and packing your bags it can sometimes feel overwhelming. On top of all the usual stuff Garrett Barclay didn’t count on going to the bank to be on his to-do list, but his mom, Sandy Sackett, insisted.

It was a clear morning in May when Garrett and Sandy walked into the Choice Bank location in Grafton. They were immediately greeted by the whole team who had prepared a special surprise.

To exercise his legs, he uses a special bike that requires electrodes to help stimulate his nerves. The only downside? They run at a high price point.

“Come on in!” said Insurance Manager, Val Walker. “Did your mom tell you why you had to come here at all?”

Garrett shook his head. “No,” he replied.

What Garrett didn’t know was that Sandy had submitted a wish through the Choice Bank Wishing Well Program on his behalf back in the fall. In her wish she mentioned that Garrett is a quadriplegic. To exercise his legs, he uses a special bike that requires electrodes to help stimulate his nerves. The only downside? They run at a high price point.

But with the help of Sandy, the Grafton team was able to buy the right kind of electrodes that Garrett needed.

After Val had finished reading Sandy’s wish back to Garrett, the team brought out some balloons and a carefully wrapped gift bag that had been put together by Client Services Specialist, Ashly Halley.

“There’s two in each package and we counted close to 25 packages in there so hopefully, it will last you a while,” said Val.

Garrett then went on to explain how he uses them with his bike. With eight hooked on at one time—two on each quadricep and two on his hamstring—he is able to pedal while the bike measures his speed and how much work he’s actually doing and how much the machine is doing for him.

“We’re going to get you exercising even more than you wanted to do!”

Since he works during the week, Garrett dedicates every Saturday and Sunday to biking.

“I usually go 10.5 miles every time I do it,” said Garrett. “And, I can re-use the packets about eight times each.”

“He should be able to go for a while now,” smiled Sandy.

The timing also happened to work out in Garrett’s favor. He was prepping to leave on a two-week trip to Baltimore in June, a trip he regularly takes to receive special treatment and therapy in the hopes that he will be able to walk on his own.

“Until then, we’re going get you exercising even more than you wanted to do,” laughed Val.

“Thank you so much. I totally wasn’t expecting this.”

Who You Gonna Call?…Call Michael!