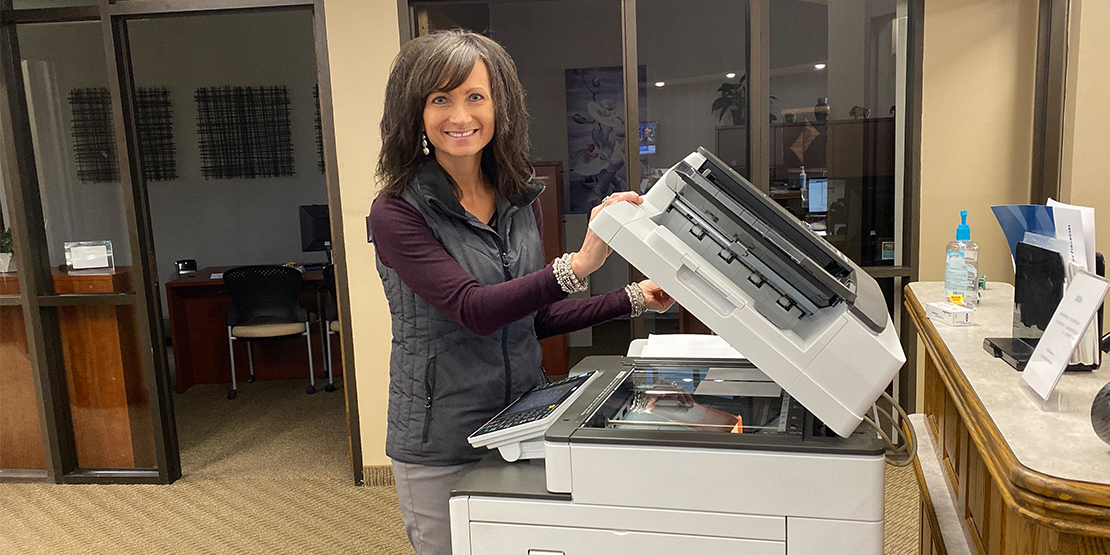 After the passing of co-worker Ruth Danielson, Sharon would often reminisce with Ruth's husband, Jerry, whenever he came into the bank. After one particular meeting with Jerry, Sharon knew she could do even more to brighten his day.

“She was just a classy, sweetheart of a lady, always smiling, happy, and willing to help out.”

When you work in a small town, in an office of only 11 people, you can’t help but grow close to your coworkers. You spend every day together, often for longer than you spend in your home. Your children play sports together; their families become your own. And like a family, when someone experiences a loss, you jump in to help.

Ruth Danielson of Walhalla, ND, passed away on November 30, 2017, at the age of 72 after a courageous battle with cancer. Ruth had worked on the front line at Choice Bank in Walhalla (formerly Walhalla State Bank) for many years prior to her retirement.

When Sharon Soeby, Client Services Supervisor, joined the Choice family in 1994, Ruth took her under her wing.

“That’s how she was,” Sharon said. “Whenever you had a question or needed to know something, she was always willing to take the time to show you. She was a team player.”

Ruth embodied Choice Bank’s core values, and her positive attitude and passion for her work were noticed by every customer who walked through the door.

“She was just a classy, sweetheart of a lady, always smiling, happy, and willing to help out,” Sharon said. “When people come into the bank, there are three stations they can choose from. People would always go to Ruth first. She just drew people in.”

On one particular visit more than a year after his wife’s passing, Jerry said something that Sharon will never forget:

Ruth was also beloved by her husband of more than five decades, Jerry, with whom she lived on the family farm just outside of Walhalla. With her banking experience, Ruth took responsibility for the family’s finances while Jerry ran the farm.

“When she passed away, Jerry was really beside himself,” Sharon said. “She was everything to him.”

When the family’s financial responsibilities fell to him after Ruth’s passing, Jerry turned to Choice Bank for help. And every time he visited the bank, no matter how large or small his question, he always asked to speak to Sharon. The two would discuss his questions about the account, but more importantly, they would reminisce about Ruth.

On one particular visit more than a year after his wife’s passing, Jerry said something that Sharon will never forget:

“He said, ‘Ruth was always the one behind the camera. She was never the one in the pictures.”

“He said, ‘Ruth was always the one behind the camera. She was never the one in the pictures,’” Sharon said. “He wished he had more pictures with her, just so he could look at her.”

A lightbulb immediately went off in Sharon’s head. She remembered the bank’s scrapbooks from “back in the day,” tucked away in storage. The books were filled with photos from Halloween and Christmas parties, customer appreciation events, and “Wild Wednesdays,” when everyone in the office would dress up in costumes to match a theme. She knew that, somewhere between the pages of those books, she could find some photographs of Ruth.

Sharon dug out the old scrapbooks and flipped through their pages, looking for any pictures of Ruth. Finally, she uncovered five or six photos of Ruth dressed up in silly costumes and laughing in candids. She copied the photos in color and sent them off in an envelope addressed to Jerry.

“Jerry doesn’t show a lot of emotion, but you know when he is smiling, it’s a real smile.”

“I just thought it could be something to brighten his day,” Sharon said. “You never saw Ruth without lipstick and a smile, so he might not have gotten to see her in that element, dressing up and acting silly. I bet he got a kick out of that.”

The photographs did indeed brighten Jerry’s day. He even sent Sharon a hand-written letter thanking her for the gift. This display of emotion was out of character for Jerry, who is described by Sharon and her coworkers as “a very matter-of-fact, stoic gentleman.”

LaRae Horgan, Business Loan Services Specialist, walked up to Sharon as she stood at her desk, opening Jerry’s letter. She noticed a tear in Sharon’s eye and asked her what she was reading. When she read the letter herself, she could hardly believe it.

“Jerry doesn’t show a lot of emotion, but you know when he is smiling, it’s a real smile,” LaRae said. “For him to send a thank-you note like that, you know it really must have touched him.”

Sharon’s small act of kindness may have had a lasting impact on Jerry, but LaRae says it was nothing out of the usual for Sharon, who lives out Choice Bank’s core value of “Smile, be helpful, and be passionate” every day.

“Sharon is passionate about everything that she does. She loves to put smiles on people’s faces and make somebody’s day, which is a quality that I admire as a coworker and friend,” LaRae said. “Sometimes people come in here and they’re having a rotten day, and Sharon can get them to smile. It’s a heartwarming feeling.”

When an opportunity arises to act on Choice Bank’s core values, Sharon does not even think twice.

“If there’s anything you can do to brighten someone’s day, no matter how small, you do it.”

“I’ve been here for so long; I don’t even think about it anymore. It’s just who I am. And I see that in all of my coworkers here,” Sharon said. “It’s just how we are here at the bank. If there’s anything you can do to brighten someone’s day, no matter how small, you do it.”

Pictures may be worth a thousand words, but memories are priceless. Sharon didn’t just give Jerry an envelope full of photographs; she gave him precious memories of his wife that he can cherish forever.  She truly went above and beyond to care for Jerry during his time of loss—after all, that’s just what family does.

Tell Me What You Know