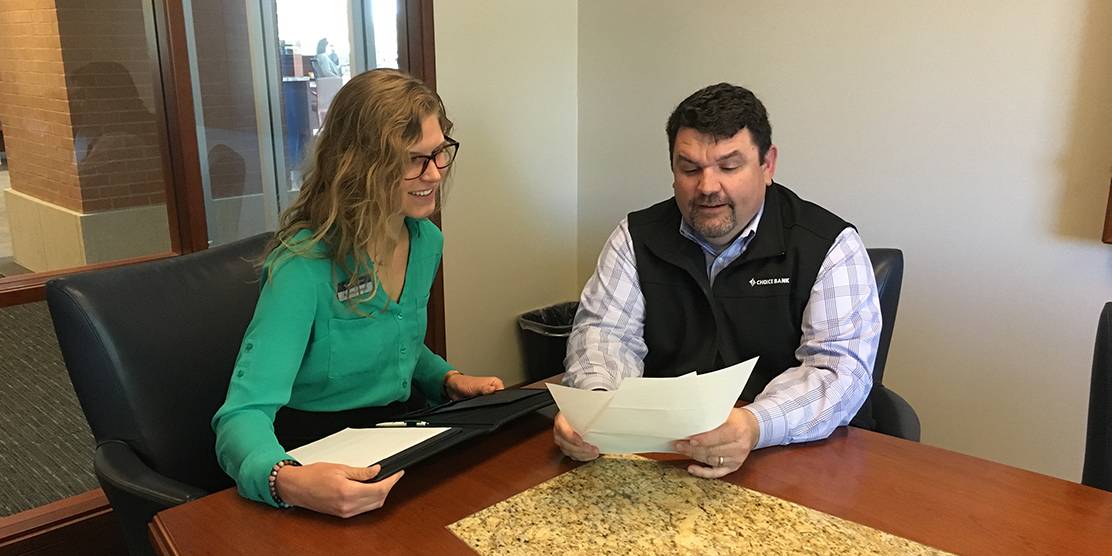 When Twila found herself in the middle of a frustrating situation with her bank, she got in touch with Kriss and Karsten who immediately started working on a solution.

When Twila Donley received the letter from her bank, she was immediately confused.

“Because your building is no longer owner-occupied,” it read, “You need to pay your mortgage down by $50,000.”

Twila had recently sold her business, Fantasia Salon; a hair-loss center that helps customers create life-like hair. But she still owned the building where the salon was housed, and she was still paying off the mortgage. She had been banking with her bank for 30 years. This had never come up.

“When she told me the story, I thought, ‘that doesn’t make any sense,’” Kriss said.

Right away she attempted to contact her personal banker at that bank. Turns out, they knew nothing of it. The letter appeared to have been auto-generated — they couldn’t do anything about it. Growing increasingly irritated, Twila then talked to her accountant, Mike Condon. Mike was concerned as well. He had never seen this happen before. So he referred Twila to an expert he knew could handle the problem: Kriss Griebenow, Senior Vice President and Commercial Loan Officer at Choice Bank.

Twila was not a customer at Choice Bank, but her bank at the time was proving to be unhelpful. So she scheduled an in-person meeting with Kriss and explained the situation.

“When she told me the story, I thought, ‘that doesn’t make any sense,’” Kriss said.

At their meeting, he could tell that Twila was feeling defeated. Even as she explained the story, she seemed skeptical that any banker would be able to help.

“I think she thought she would get the same unhelpful answer,” Kriss said. “A bank is a bank. How can they help?”

But Kriss was determined to prove her wrong and show her the Choice Bank #PeopleFirst difference.

“We can help turn this around,” he assured her. “Let me see what I can do.”

Twila left the office that day feeling downtrodden, but with a glimmer of hope. Meanwhile, Kriss did some digging and confirmed that they were able to consolidate Twila’s mortgage into a new Choice Bank mortgage, which would take care of the $50,000 that her previous bank was asking for.

“I looked at the homework we’d do — an internal evaluation, and refinancing that would wrap the two mortgages into one,” Kriss explained. “The internal evaluation proved that this was 50% loan to value. We understood the historical value. In the end it was a matter of, why wouldn’t we do this?”

Three hours later, he gave Twila a call back.

“Twila, we have a solution for you,” he said.

“She was surprised we were done even earlier than we had estimated,” Karsten said. “She sat there going, ‘that was way easier than I thought it would be!’”

He explained that they would be able to take the loans out at face value, and consolidate them into one loan at Choice. The $50,000 payment would be taken care of, and nothing would come out of her pocket.

Twila was elated. She wanted to get the ball rolling right away. What’s more, she was eager to leave her previous bank and move her banking to Choice. Despite decades of being a loyal customer, they had been unable to give her the personalized care she needed when their auto-generated letter came through. It was time for a change.

Kriss and Karsten Jensen, a Loan Services Account Manager, worked quickly to take care of Twila’s loan and transfer her accounts to Choice Bank. Just two weeks later — days before their estimated closing date — everything was finished. Twila’s loan was consolidated and her $50,000 problem was taken care of.

Twila came in to sign the closing papers with an expression of disbelief and relief.

“She was surprised we were done even earlier than we had estimated,” Karsten said. “She sat there going, ‘that was way easier than I thought it would be!’”

Both Kriss and Karsten could see a visible change in Twila’s demeanor from their first meeting, where she was agitated and nervous about the situation. This time, she was smiling and continued to thank them over and over again for their help.

“She seemed to have a huge sense of relief and comfort, knowing she was in good hands,” Kriss said. “It’s all because we did what we said we would do. Sometimes, it’s that simple.”

A few months later, Kriss and Karsten received a letter in the mail at Choice Bank addressed to them.

A few months later, Kriss and Karsten received a letter in the mail at Choice Bank addressed to them. When they opened it, they found a two-page handwritten thank you note from Twila.

“I just wanted to send a huge “thank you” for the great customer service I received from you and Karsten Jensen in helping me refinance my building in Crystal, MN.

I had worked with a large bank for 30 years. I was never late or missed a payment. They wanted me to pay down my mortgage $50,000 because it wasn’t owner-occupied. This was totally unacceptable. I can’t tell you how much I appreciated your great customer service. You listened to my needs and promised a solution for a new mortgage in a quick and timely manner. You made me feel like a valued customer, which is a quality I so admire and is so difficult to find today. Karsten was also a great help to me.

I have no problem referring friends and family to you and Choice Bank. Again, my sincere “Thank you.”

Kriss and Karsten were moved to receive such a letter.

“To me, we just did what we said we would. Here, going ‘above and beyond’ is the norm,” Kriss said. “She was blown away by what, for us, is just doing our jobs. It’s showing her what banking should be.”

This experience is another illustration of how Choice Bank strives to elevate the banking experience. In reflecting on the story, Karsten referenced a Choice core value: Commit to your customers with undivided attention.  What Twila experienced in her relationship with Choice is engrained into our everyday values, and how every customer is treated; with respect, personalized care, and with diligent follow-through to get the job done. It’s all part of being #PeopleFirst.

A Visit to Fargo with Adam Thielen