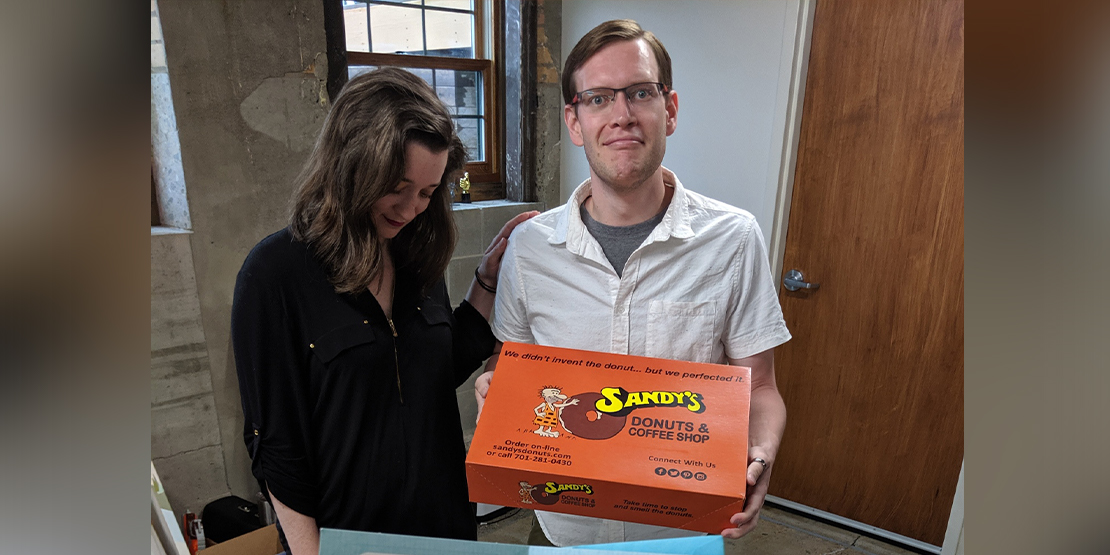 Sometimes it really is just the little things! When Myriad Mobile (now Bushel) jokingly announced their name change as a eulogy, Choice team members, Chad and Tim, knew they had to get in on it.

The morning of Wednesday, June 26 was an unusually somber one at The Stage at Island Park. That week’s 1 Million Cups Fargo gathering, typically a raucous event where entrepreneurs and community members exchange news and ideas over cups of free coffee, took on a more subdued tone. Each attendee was handed a program as they entered the auditorium, almost as if they were at a funeral.

Each attendee was handed a program as they entered the auditorium, almost as if they were at a funeral. Which they were—kind of.

That morning, the Fargo-based app development company Myriad Mobile was laid to rest. Co-founder and CEO Jake Joraanstad announced to the crowd that the Myriad brand would be folding into Bushel, a platform that allows elevators and cooperatives to connect with their growers and share information in real-time, and be renamed Bushel.

“Myriad slipped quietly into the land of brands past on June 26, 2019,” Nathan read. “Myriad is survived by  Bushel, who will continue to do the rewarding work of custom software development for agriculture companies. Blessed be the memory of Myriad Mobile.”

The funeral was a farce, of course; attendees celebrated the new venture with the Bushel team, and when the time came, went about their day. However, the morning’s events stuck with Choice Bank employees-Chad Bjornson and Tim Karsky.

“You have to be good business partners, but you have to have a friendly relationship, too.”

“It was pretty clever,” Tim said. “Instead of flowers, they asked us to please send Sandy’s Donuts to the employees.”

Tim, President of Choice Bank North Dakota, and Chad, Vice President, Business/Ag Banker, have known Jake and his team from the very early days of what was then Myriad Mobile. Myriad was one of the first fintech companies Choice Bank ever had a relationship with, and Choice was one of the first banks to take a chance on Myriad, spending months getting a loan together for them in 2016.

“They are fun. Jake jokes around all the time, and Tim and I like to have fun like that too. It’s a good pairing,” Chad said. “You have to be good business partners, but you have to have a friendly relationship, too.”

The morning after 1 Million Cups, Tim stopped into the bank on his way to Minneapolis. When he entered the break room, something on the table caught his eye—one dozen Sandy’s Donuts. It was the perfect time to have a little fun with the guys at Solutions by Bushel. He snapped a picture and sent it to Chad and Jake, along with a message that read:

“Damn, I hate it when they send these to the wrong place.”

But Tim and Chad did not stop at one joking text message. The donuts prompted Tim to think of a way they could make an even bigger impact on one of their customers.

“Tim’s always got goofy ideas,” Chad said. “Our business is so competitive; you’re always looking for something else to set you apart. We really try to build relationships with customers.”

“Blair, can you help us with a special donut delivery? Tim requested. “It’s for a funeral…”

The pair sprang into action. Since Chad was in Bismarck and Tim was in his car on the way to Minneapolis, they enlisted the help of Senior Vice President and Director of Residential Mortgage Lending Blair Sandy, who just happened to be near the Downtown Fargo Sandy’s Donuts at the time.

“Blair, can you help us with a special donut delivery? Tim requested. “It’s for a funeral…”

Blair, who also works with Myriad Mobile, was immediately on board.

Not only did Blair pick up and hand-deliver a few dozen donuts, but he also included a sympathy card that read, “Our Condolences” and wrote a heartfelt, personalized message to the Bushel team. The Bushel team was blown away—of the hundreds of community members who attended 1 Million Cups on June 26, the group from Choice Bank were the only ones to actually send over donuts.

“I think we gained a lot of brownie points from that, and it was a lot of fun,” Tim said. “I wonder how many times others think about doing something like that, but don’t do it. I think that’s what Choice is really good at: actually doing it. That’s the stuff that makes a difference.”

Tim and Chad knew that they did not need to spend a lot of time or money to make a big impact on one of their business relationships. The entire gesture cost them maybe 40 dollars for the donuts and one hour of their day, but it helped them deepen an already strong relationship with one of their customers.

Plus, it perfectly illustrated one of Choice Bank’s core values:  work hard, do the right thing, and have a little fun!

“I wonder how many times others think about doing something like that, but don’t do it. I think that’s what Choice is really good at: actually doing it.”

“More than any place I’ve ever worked, Choice actually lives their core values and they want you to live them out, too,” Chad said.

Naturally, Jake did not want to miss out on the fun. In keeping with the joke, he sent Tim and Chad a picture of the Bushel team holding the boxes of donuts, some with their heads bowed in mourning.

“We received your boxes this morning,” the message read. “Thank you for the sympathies.”

As for the donuts?

“I heard they ate all of them,” Tim said.

Teamwork is the Ticket (To Canada)

Bettering Our Communities One Wish at a Time