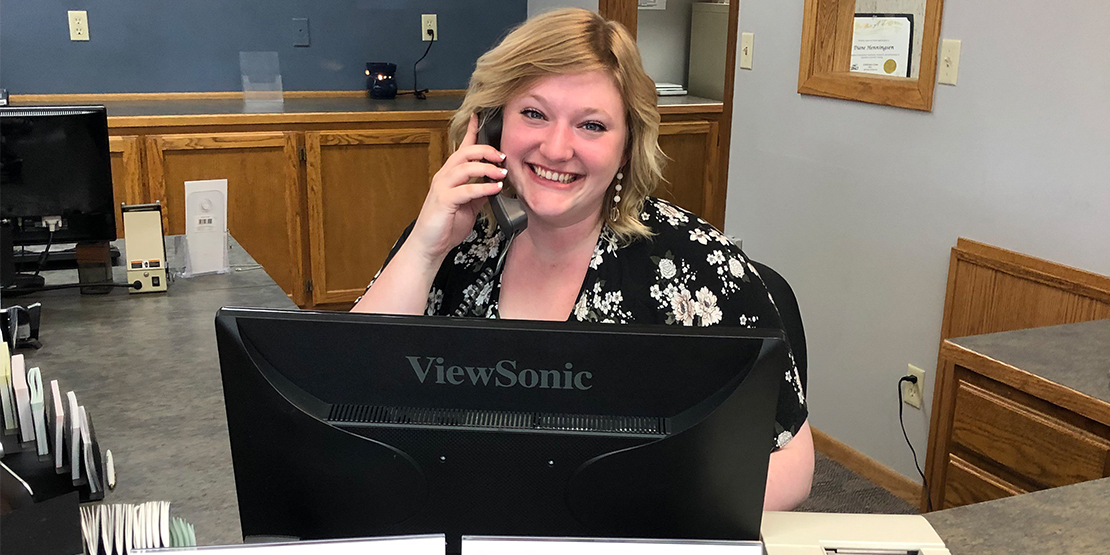 With a couple phone calls and the selflessness of several Choice team members from across North Dakota, Liz was able to ensure her customer had a successful business trip to Canada.

It was a sunny Monday morning in Ellendale, North Dakota, when Elizabeth “Liz” VanAarde, a Relationship Banker at Choice Bank, got an urgent call. It was Scott, a local farmer. He was leaving the next day to buy a piece of equipment from Canada, and it was his first time doing an international transaction.

He was leaving the next day to buy a piece of equipment from Canada, and it was his first time doing an international transaction. “What’s the best payment method?” he asked.

Liz’s first thought was a cashier’s check. But she wanted to double-check with someone since it was her first time handling an international purchase as well. So, she called up Erica Schierholz, Director of Frontline Learning & Recruitment, in Moorhead to double-check.

At first, Erica agreed with Liz; a cashier’s check should work. But then, she paused.

“What if we used the exchange rate to calculate exactly how much he needs, and get him a Canadian draft for the money directly? He could meet up with someone at our Walhalla location,” she suggested.

This is the best option for the customer, she explained, because it leaves no room for inflating exchange rates like a cashier’s check would.

“It was such a great #PeopleFirst idea,” Liz said. When she explained it to Scott, he was excited about the idea as well.

“The only thing is I’ll be driving through Walhalla likely very late at night,” he said, explaining that he was attending his daughter’s track meet that night and would be leaving after. “It might be closer to 9 or 10 PM.”

The next step was to call LaRae Horgan, Business Loan Services Specialist, at the Walhalla location, and see if she would be willing to meet up with Scott as he passed through to Canada. She agreed without hesitation — even knowing that it meant working after hours.

“It’s a unique situation. He wouldn’t be able to get it without our help,” LaRae said. “It wasn’t a problem for me at all. I think of it as, what would I do for my family, my siblings? You treat every customer like your family. You try to make it work.”

When Liz passed this on to Scott, he was surprised.

“We’ve got you covered!” Liz said, feeling so grateful for LaRae.

“It wasn’t a problem for me at all. I think of it as, what would I do for my family, my siblings? You treat every customer like your family. You try to make it work.”

Liz gave LaRae’s information to Scott, and they set up a meeting place and time that was convenient for him. Liz was blown away by the support of both Erica and LaRae.

“It was definitely a teamwork effort of Know when to ask for help, know when to offer it,” she said, citing a Choice Bank core value.

But then, the plans changed. Scott decided to take a different route into Canada that wouldn’t pass through Walhalla. Instead, it made more sense to pick up the draft at the Grand Forks location.

Quickly, Liz called up Chris Danielson, Client Services Trainer in Grand Forks, to see if he would be willing to step in. Just like LaRae, Chris agreed without hesitation.

“It’s not hard for me to drive five miles and meet him,” Chris said. “It’s an expectation we set for our customers, that we’ll go above and beyond for them.”

Liz was delighted by the helpfulness of her team across the state. Within 12 hours of Scott first making a phone call to Liz, not only did he have the best payment method for his Canadian purchase, but he also had a plan in place to pick it up in a way that was most convenient for him.

She connected Scott and Chris and the two made a plan to meet up at a gas station close to the interstate where Scott would be driving.

“They’ve never interacted with this man before,” Liz said. “He could’ve been anybody. But they didn’t even hesitate. They didn’t think, ‘Oh, does this work for my night.’ They both immediately said, ‘Absolutely, it doesn’t matter what time.’”

“They’ve never interacted with this man before,” Liz said. “He could’ve been anybody. But they didn’t even hesitate.”

That time ended up being 8:15 AM the next day. Scott sent Chris a text, and they met at Choice Bank before the doors were open. Chris ran the draft out to Scott’s car, ID’d him and sent him on his way.

“I wanted him to get what he needed,” he said. “It all went really smoothly.”

Less than 24 hours after Scott’s first phone call to Liz, not only did he have the best and most secure possible method to pay for the equipment, Choice Bank had arranged a pick-up within his timeline, and he was able to head to Canada when planned.

Liz checked in to make sure all had gone well.

“Scott is a man of few words,” Liz said. “But he was clearly impressed. He was definitely thankful!”

Liz was equally impressed with the efficiency and willingness of Erica, LaRae, and Chris to all help her out and help a customer in Ellendale find the best solution. It was truly a tangible illustration of Choice Bank being #PeopleFirst, she said — not only for customers but for each other, too.

Operation Deal of the Day