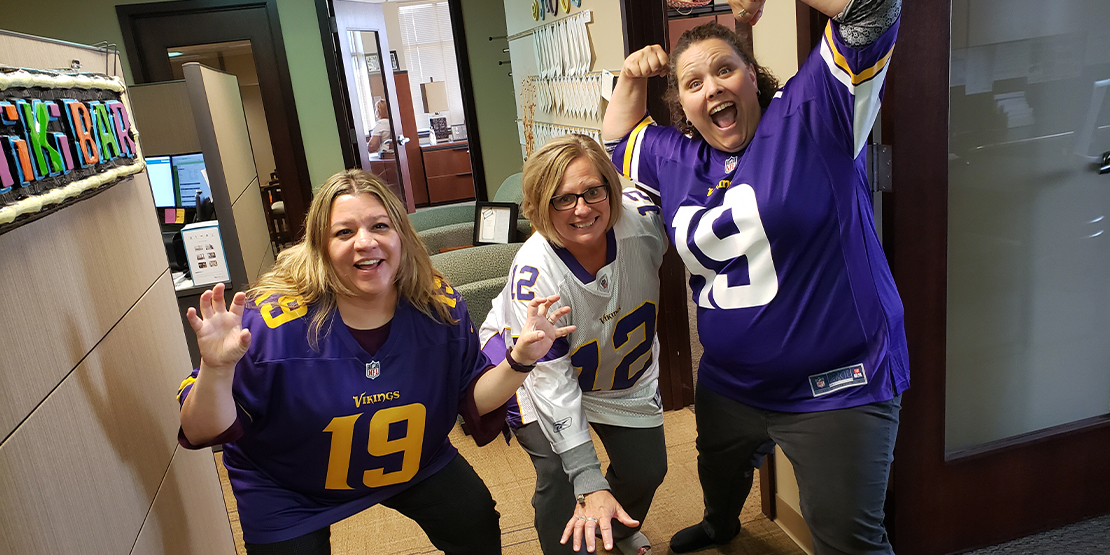 Amy leads her team by putting them first everyday, which also means leading the charge with "SKOL" spirit on game days.

Amy Ebensteiner considers getting a Minnesota Vikings-related tattoo at some point every year.

“Probably every month, actually,” Amy adds with a laugh. “I’ve talked myself out of it for the past 10 years. It’s especially tempting during football season.”

It wouldn’t be the craziest thing she’s done as a Vikings fan; last year, in her excitement to head to Minneapolis and watch the Vikings vs. Packers game, she jumped in her friends’ car and left her own car with the engine running. (She left her wallet in the front seat, too.)

Growing up, Amy played football in her backyard with friends and during halftime at local games. Although her parents aren’t diehard Vikings fans, she has 29 aunts and uncles — many of whom instilled a passion for the Vikings in her from an early age. She watched her first game around first grade, and today she wouldn’t miss one for anything.

It seemed impossible for her Vikings love to grow much more — but when Adam Thielen joined the team in 2013, it did just that.

“I knew he was from Detroit Lakes, which is only 20 minutes from where I grew up,” she says. “I was so excited to have a hometown boy on the team. He’s also a phenomenal football player. So how can you not love the guy?”

Needless to say, when Choice Bank started its partnership with the Thielen Foundation, a foundation started by Adam and his wife Caitlin with a focus on youth development, Amy was thrilled. And when it was announced that Adam himself would be presenting at a local Fargo event, 1 Million Cups, on June 19, 2019, she could hardly contain her excitement.

Yet her first thought was not about herself. It was about her team members.

“I first thought of the interns, and how cool it would be for them to get to go,” she says. “I called Jess Lupkes to see if we could make it happen.”

Unfortunately, the interns were scheduled to be out of town that day. Amy’s next thought was — what about her team?  As a Client Support Supervisor, Amy manages three other employees as they answer calls and speak with customers and frontline bankers. The calls are often urgent and need immediate support, so it’s important that someone be available at all times to answer the call. Amy realized what she could do.

“I realized I didn’t have any meetings that morning,” she says. “And it’s a Wednesday morning, so it’s not as busy.”

That afternoon, Amy approached her team and told them that they should go to the event. She would stay behind and answer the calls.

“But what about you?” they asked. They, like most of Amy’s team members at Choice Bank, know her as the most avid Vikings fan of all of them. Didn’t she want to go?

“I just thought — to have a Minnesota Vikings player here, at a free event, it was something I was so excited about. I wanted everybody I knew to have the opportunity to be there,” Amy says. “Honestly I was more excited for them that they were going.”

Jess Lupkes, Choice Bank Human Resources Officer, later asked Amy if she was going to the event. When she learned that Amy had taken the place of her team so that they could go, she was moved by Amy’s leadership.

“No one is as big a Vikings fan as Amy,” Jess says. “Her willingness to cover for her team so that they could experience the event instead of her is a true form of leadership.”

It reminded Jess of the book Leaders Eat Last by Simon Sinek, which emphasizes that true leaders let their employees lead. One of the challenges of being a leader, the book says, is putting your team first.

For the ever-smiling Amy, it was an “easy call to make,” she says.

“I was truly excited to have the opportunity to offer this experience to them,” she said. “It was a great time for them to see why Choice Bank chose Thielen Foundation, and show the similarity of our core values, and to potentially meet Adam Thielen!”

On the day of the event, her team members kept asking her, “Are you sure you don’t want to take my spot?” But Amy refused and instead just insisted they send her some photos.

True to their word, her team sent her texts in real-time; “Adam just walked by us!” and “We’re inside the building!”

Amy followed along with excitement.

She also knew that the event would be live-streamed, and she had it queued up on her computer. However, as soon as Adam started talking, the phone started ringing.

But Amy was unfazed.

“I knew eventually I might have the chance to meet him, through our partnership with the Thielen Foundation,” she says.

The chance ended up being sooner than she thought. That morning, her team returned full of stories and brimming with excitement from the event. Amy soaked in the details with a wide grin. That afternoon, she got a video call from Tim Heilman, Choice Bank EVP, Chief Brand & Innovation Officer.

“Hey Amy, we have a special guest here to talk with you,” he said.

Adam Thielen popped his head into the camera.

Amy nearly fainted. Later, Adam paid a visit to her

“It was awesome. I got to shake his hand and visit with him for a bit,” she said. “He went around the whole branch and met everybody. And he took the time to shake everyone’s hand. It didn’t seem like he was in a hurry.”

As for the Vikings tattoo?

“Who knows?” she said with a grin. “This might be the year.”

Banking Through a Snowstorm