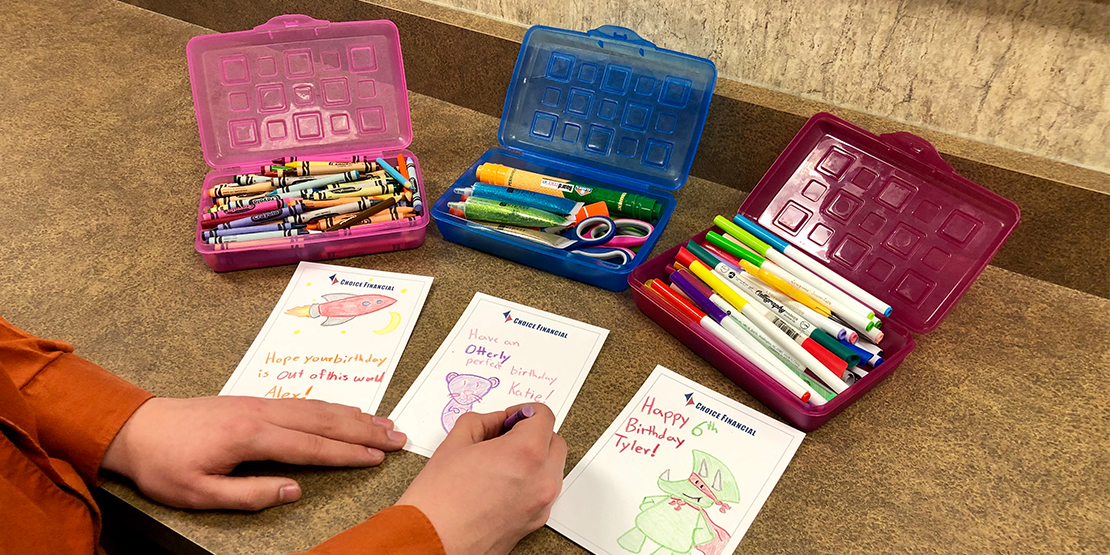 Connor finishing up a batch of birthday cards.

Sometimes it’s a dinosaur. Other times, it’s a superhero. An animal. Spongebob Squarepants and Captain Underpants. These are the doodles that grace the birthday cards from Choice Bank’s Fargo location, where Client Services Specialist (and resident artist) Connor Radebaugh has his studio (an office desk).

Each birthday card doodle is hand drawn using crayons — Connor’s favorite medium. And each card is delivered to the kids of Choice Bank’s Adventure Club on their birthday.

“Connor makes such awesome birthday cards,” said Mary Jane Starkweather, a fellow Client Services Specialist who works with Connor. “He puts so much thought and care into each one.”

It started in the summer of 2018. Each month, Choice Bank locations receive a list of all the Adventure Club kids’ birthdays. Connor works with his team to send out birthday cards to celebrate — usually about 20-30 cards. As he prepared to make the cards for the July birthdays, Connor grabbed some crayons and started drawing.

As he prepared to make the cards for the July birthdays, Connor grabbed some crayons and started drawing. “I just felt like it,” he said. “I wanted to have a little fun with it.”

While his favorite thing to draw will always be dinosaurs, he says, he also tries to tailor each drawing to what he thinks the kid will like based on their age and what he knows about them. Ducks, princesses, Fortnite characters — once he tried to draw Simba from the Lion King but the crayons made it difficult, so “it turned into just a more generic lion.”

Connor shrugs them off as no big deal, but Mary Jane and his co-workers were very impressed when they saw his work.

“Each one is different. I try to get more creative with each one,” he said.

While Connor has never been able to see the kids’ responses to the cards, he hopes it can bring a friendly, personal touch to the often intimidating idea of a bank.

“When the kids see that card, they connect it with Choice Bank and with the people who work there,” she said. “They see that we care.”

“I think there’s an issue with younger generations seeing banks as a monolithic idea. Like it’s just a machine,” he said. “With these cards, it’s a way to show them that actual people work here. It’s not printed. It’s handmade.”

“When the kids see the card, they connect it with Choice Bank and with the people who work there,” she said. “They see that we care.”

It’s not the first time Connor has used his artistic ability to be #PeopleFirst, Mary Jane added. For Christmas, he created handmade stockings out of felt and filled them with candy canes, then passed them out to customers. The response was magical. The birthday cards are just another way to spread joy — with a little crayon flair, too.

“It just shows how much he cares,” Mary Jane said.

Giving up the Vikings