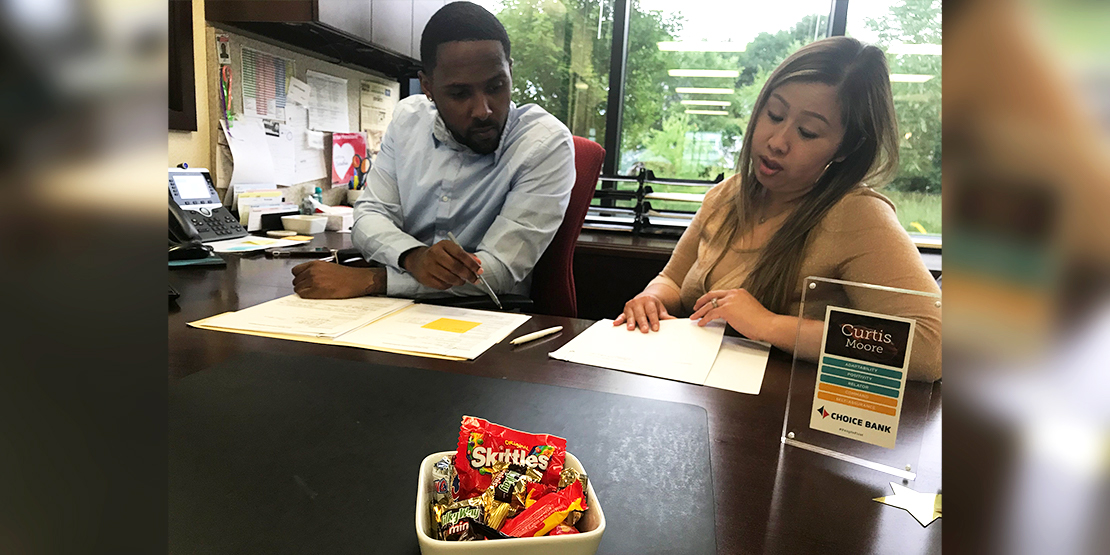 A little sugar and a can-do #PeopleFirst attitude is all it took for Curtis and Pang to help some customers navigate the challenges of opening a new non-profit business account.

At first, the two women who walked into Choice Bank in Bloomington, MN at 10:30 AM one morning said they didn’t need any help. After a while, Curtis Moore, a Deposit Services Account Manager, checked on them again to see if they needed anything.

“We need to meet with each other for a while to discuss our business,” one of the women said.

An hour ticked by. Curtis and a few others, like Pang Xiong, a Cash Management Officer, and Kirsten Larson, Marketing Coordinator, walked over to check on the women. Each time they smiled and said they weren’t ready yet.

But then, two hours later, as Curtis was getting ready to take his lunch break, the two women got up and approached his desk.

“We thought maybe they were waiting for someone to meet up with them,” Curtis said.

But then, two hours later, as Curtis was getting ready to take his lunch break, the two women got up and approached his desk.

Curtis learned that the two women were recently retired and volunteered with the local subdivision of Mount Olivet. Mount Olivet is a large organization that includes a church, camp, careview home, conference, and retreat center, day services, assisted living, and case management services. These women volunteered with the fundraising committee for these ministries and were seeking to open an account to deposit proceeds from fundraising events.

Needless to say, it was a bit complicated. Curtis realized he could benefit from the help of Pang, who has experience with non-profit accounts.

“It was a ‘Know when to ask for help,’ moment,” Curtis said.

Pang was in the middle of her lunch break, but when Curtis explained the situation, she hopped up to help. As she and Curtis asked the women more questions, they realized they had a daunting task in front of them.

“Normally we guide customers to a link on our website and they can fill out the application from there. But once we talked to these women, we realized that wouldn’t work.”

“They had no idea what they were doing,” Pang said. “Normally we guide customers to a link on our website and they can fill out the application from there. But once we talked to these women, we realized that wouldn’t work.”

The women were apologetic. They knew they were coming in without any foundation. In fact, they had already tried to go through the process at another bank and gave up. Pang and Curtis assured them they could help.

“I felt that we are the experts here,” Pang said. ‘We should be guiding them and helping them rather than just direct them to the website. Especially when we knew from our conversation that wasn’t going to work.”

So, the four of them settled in at Curtis’s desk, snacked on a few of his Snickers and M&M’s he had out in a bowl, and walked through the step-by-step process of starting a non-profit business account. Not only were they opening up a new bank account, but they were also helping the women establish their fundraising entity as a non-profit. They walked through how to file for tax exemption, how to register through the Secretary of State, and clarified how donors should address their checks.

“We did not expect to spend so much time with them, and I was starving,” Curtis said with a laugh. “But we wanted to make sure they had everything in order. And, walking through the process was a learning experience for us too.”

“We did not expect to spend so much time with them, and I was starving,” Curtis said with a laugh.

Before they left, Curtis offered the last of the chocolates from the bowl on his desk. The women took some and thanked him.

“I might have to take a little more medicine, but that’s okay!” one of them said.

The four laughed and said their goodbyes. It was a much different feeling than when they had first approached Curtis, worried and apprehensive about the unknown.

“They were so thankful and so appreciative,” Pang said. “When they came in, they were stressed out — but they left smiling.”

Kirsten Larson, who had spoken with the women that morning, observed how Curtis and Pang gave up their time to help. In their actions, she saw a clear illustration of the Choice Bank core value, Commit to your customers with undivided attention. She knew right away she wanted to nominate them both for a #PeopleFirst story.

“They pretty much started their business for them,” she said. “Every time I walked by, I could see they were still working. But they never complained. They did an amazing job.”

A few days later, Curtis got a phone call from one of the women. They checked in on the account, and Curtis asked how the new business was going. Everything was in order, the tax exemption application was being processed, and the two women had passed on all they learned at Choice Bank to their team.

“Thank you so much, again,” the woman said, with such a genuine tone that Curtis couldn’t help but smile. Being #PeopleFirst is always worth it, he thought — even if it means missing your lunch.

Sending Soldiers a Piece of Home