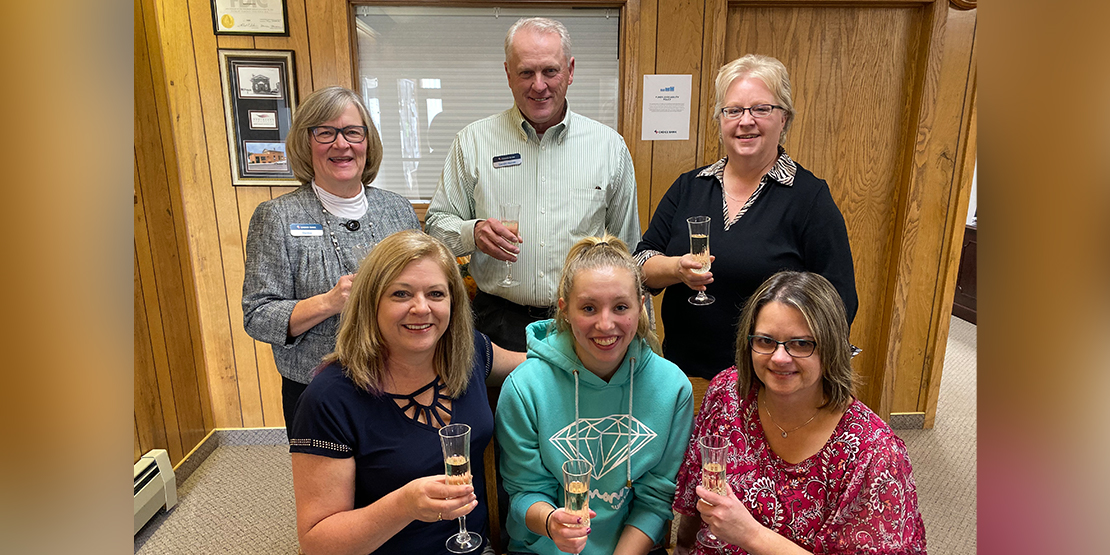 Soon-to-be-newlyweds, Abby and Jacob, were looking forward to their wedding when they received some troubling news about the house they had bought. Luckily, Gerald and the ladies at Choice Bank in Medina had their backs!

There are a lot of moving pieces that go into buying a new home: applying for a mortgage, finding a property that suits your needs, closing—the list goes on. The process on its own can be stressful enough. Add wedding planning on top of that and it can quickly become overwhelming.

There are a lot of moving pieces that go into buying a new home. Add wedding planning on top of that and it can quickly become overwhelming.

Luckily, first-time home buyers and soon-to-be-newlyweds Abby and Jacob knew who to turn to for some advice on how to get the farmstead they wanted: Gerald.

Gerald Horner is the Location President of Choice Bank in Medina. He’s also a rancher, so Abby and Jacob’s situation was familiar territory.

“I helped them do the paperwork and sent them to the Bank of North Dakota because I knew they’d be able to qualify for a beginning farm loan,” Gerald said.

With Gerald’s help getting the ball rolling for them, Abby and Jacob were approved shortly after and found themselves going through all the motions involved in the homebuying process. There were a couple of bumps along the way. It took longer to close on the property than they had originally planned, but they worked through it and were able to move in ahead of their wedding day, which was just a few days away.

Then they got a call from the closing lawyer. The people who had sold the property to them had not provided an abstract (the history of the property on paper), which the Bank of North Dakota required to wrap up the final steps in the process of securing their permanent financing. Abby and Jacob were devastated.

“Abby was ready to rock and roll and give them a piece of her mind when they got the news,” said Karen Schlecht, Senior Client Services Specialist.

“She told us how frustrated they were because the lawyer had said they would have to make up a new abstract for the property that could cost them up to $2,000.”

Abby is a familiar face to Karen and the rest of the team members at Choice Bank in Medina. She cleans the office every Wednesday during work hours and has become like family to them. Knowing that the wedding was coming up, all the ladies at Medina—Karen, Rhonda, Val, and Denise—took Abby out to dinner and drinks to celebrate. That was when Abby told them the news.

“She told us how frustrated they were because the lawyer had said they would have to make up a new abstract for the property that could cost them up to $2,000,” Karen said.

The next day, Karen and the rest of the ladies came back and told Gerald everything. He immediately jumped on the phone and got a hold of Jacob.

“I called Jacob and got the story on it. They didn’t know what to do because this was all new to them,” Gerald said. “So, I decided to step in and see what I could do.”

After talking to Jacob, Gerald started making some calls. He called the title company, the closing lawyer, and an abstract company trying to find answers. It wasn’t until four days before the wedding that they received some good news: the abstract had been found!

It wasn’t until four days before the wedding that they received some good news: the abstract had been found!

It turned out that the title company had been able to contact a company in New York that had done title insurance on the property over 20 years ago. They would send the abstract over as soon as possible.

Abby and Jacob couldn’t have been more relieved.

“They were happy I was able to help them out with the few calls that I made,” Gerald said. “I was just glad that I was able to get it worked out for them and save them a  little bit of money during such a stressful time.”

To Gerald, what he did was a no-brainer. He never thinks twice about making his customers’ business his business when they’re in a tough situation. And anyone who knows Gerald knows he has their back no matter what.

“He’s just so conscientious,” Karen said. “He follows through and helps his customers. He does whatever he can. That’s just who he is.”

With Gerald’s help and the missing abstract behind them, Abby and Jacob were able to fully focus on their wedding.

So on Sunday, August 4, with the sun radiating in front of passing storm clouds at the farmstead of Jacob’s grandfather, Abby and Jacob exchanged their vows. Family and friends were there to celebrate, including some of Abby’s Choice Bank family—Karen and Val. At the end of the ceremony, Abby and Jacob were whisked away in a horse-drawn carriage ready to begin their new lives together.